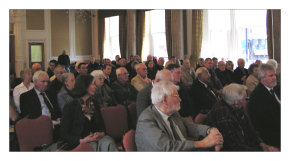 A copy of the initial presentation given at these meetings by Roger Lawson (standing in the picture below with Brian Peart to his right) is present at: Presentation. This lasted about 35 minutes and thereafter the meeting was basically a question and answer sessions (the main purpose of the meetings was to try to explain to shareholders what had happened and what might happen going forward). More than an hour was taken up by questions at both meetings. The latest news about the Virgin Group proposal was also discussed.

Shareholders based in the North of England were clearly more positive about keeping the Northern Rock name and for the company to remain an independent entity. A member of the audience in Newcastle suggested that a poll be taken as to whether people found the Virgin proposal acceptable and the audience was unanimously opposed to it, even though UKSA advised that people should not jump to conclusions before more details had been obtained on the proposal and a full analysis done. In London the same meeting produced only 3 in favour and about 15 opposed. 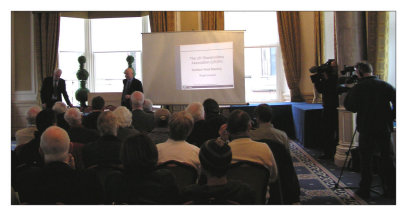 FCA proposes a new category of authorised open ended fund called the long term asset fund (LTAF)
Thursday, July 22, 2021 - 18:44
UKSA & ShareSoc have responded jointly to the most important review of auditing and corporate governance for a generation
Tuesday, July 6, 2021 - 08:59
Wiping out shareholders should not be the default option
Monday, June 28, 2021 - 14:20
END_OF_DOCUMENT_TOKEN_TO_BE_REPLACED