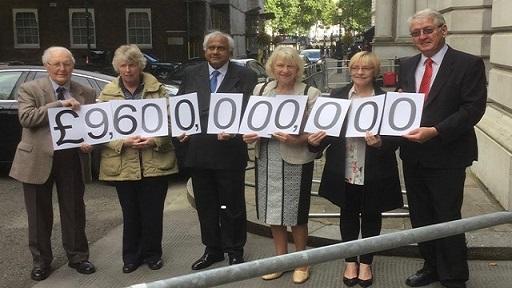 Dennis Grainger and Action Group colleagues have been heavily engaged in media interviews to coincide with the 10th anniversary of the ‘run', culminating in the hand delivery of a letter to the Prime Minister in Downing Street. The letter can be read by clicking here. The above picture (Left to right, Bill Penman-Brown, Celia Elliott, Pradeep Chand, Maxine Grainger, Marilyn Sterry, Dennis Grainger), shows the projected net surplus of £ 9.6 Billion George Osborne predicted from the acquisition of Northern Rock and Bradford & Bingley. 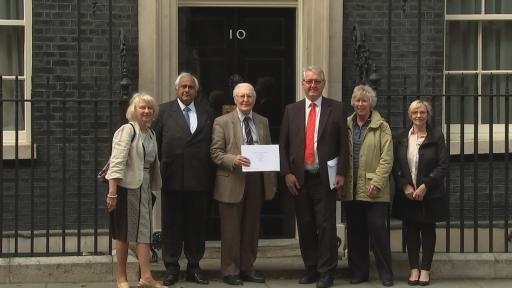 Dennis said he and five other shareholders (Left to right, Maxine Grainger, Pradeep Chand, Bill Penman-Brown, Dennis Grainger, Celia Elliott, Marilyn Sterry), supported by Brian Peart and Rob MacDonald, presented a letter to the PM's office at No 10 at 2pm on 14th September, together with a basic 'summary' of the case. This was reported on ITN news and can be viewed by clicking on this link.