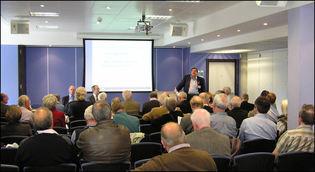 On the 31st October 2009 we held a public meeting for Lloyds Bank shareholders at the QE II Conference Centre in London (as part of the World Money Exhibition and Conference and where the organisers provided a room at no cost).

The meeting was primarily aimed at enabling shareholders to ask questions about what this Group has been doing and the progress of the campaign to obtain some recompense for shareholders from the losses they have suffered as a result of the mistaken merger of Lloyds TSB and HBOS. It enabled those who have registered with this Group to meet the committee formed to run this Group and was primarily a question and answer session with two short presentations by Group Chairman Nick Shaw and UKSA Director Roger Lawson at the start. The meeting was attended by about 50 shareholders and a number of members of the press.

The presentation slides, in pdf format, are here. 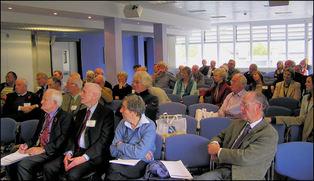 In addition UKSA Director Roger Lawson gave a presentation on "Shareholder Activism in the Banking Sector" later the same day where he covered the wider banking crisis and outlined what UKSA has been doing in this area over the last year.