Martin studied electrical engineering at university, then decided to become an actuary. He started work at a life insurance and savings company, followed by a consulting actuarial firm advising on final salary pensions (yes, it was some time ago). Then he moved into general insurance, being the first actuary to be employed on by the Corporation of Lloyd’s, and has worked in general insurance ever since. He is an active contributor to the research work of the actuarial profession.

Some time in 1992 Martin spotted a letter in the FT by Donald Butcher about a small new working group of private investors, contacted Donald and joined the working group which subsequently became the UK Shareholders’ Association. His experience within the financial sector has taught him what a bad deal individual savers get, unless they are particularly well informed and know how to avoid or minimise expenses and charges. This situation is not going to improve unless these messages are more widely understood and acted on. Apart from this, his other big concern is the lack of real pressure on company managements to act in the long term interest of their underlying owners,

Martin’s investment style is to try and identify a limited number of companies he likes and to hold them for as long as possible, not worrying about market ups and downs. In his spare time he enjoys sailing, but his main activity outside work is trying to improve his piano playing.

Back to Board of Directors 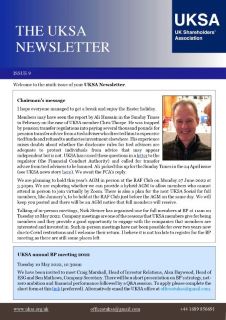